By so far because I always have plan to tie all year long. This falls apart as I get busy with wedding ceremonies, student recitals, registering families for next year, vacations and, oh yeah, actually going fishing.

Typically I want to get my tying gear out once I am sure I am not going fishing again. But it always seems to be after Christmas when the vise come out.

Doing the math it seems I only have 4 month of tying done a year.
Here is some work and a little talk about the patterns.

These are streamers tied using the ball end from guitar strings as weight. The first is a Black Nosed Dace variant. The variant is because I don’t have any black buck tail. The Second is a Silver Darter (I also did a set of Golden Darters. I hate and have no Mylar piping and so, use dubbing and rib for durability.

Next up is some simple zonker strip flies. The weight is Bass string ball ends and so a ‘Bass’ fly is born.

Next up was finding some hot pink beads and making a Tupp’s Indispensable variant (Who uses ram scrotum hair any more) and something with a lot of red .

While on the topic of flymph style bead heads.

Found a bolt of this fake mohair a few years ago at Micheal’s Crafts and have been giving it away and making my FauxHair Leeches ever since!

Here we have some seasonal decorating stuff made into minnow patterns 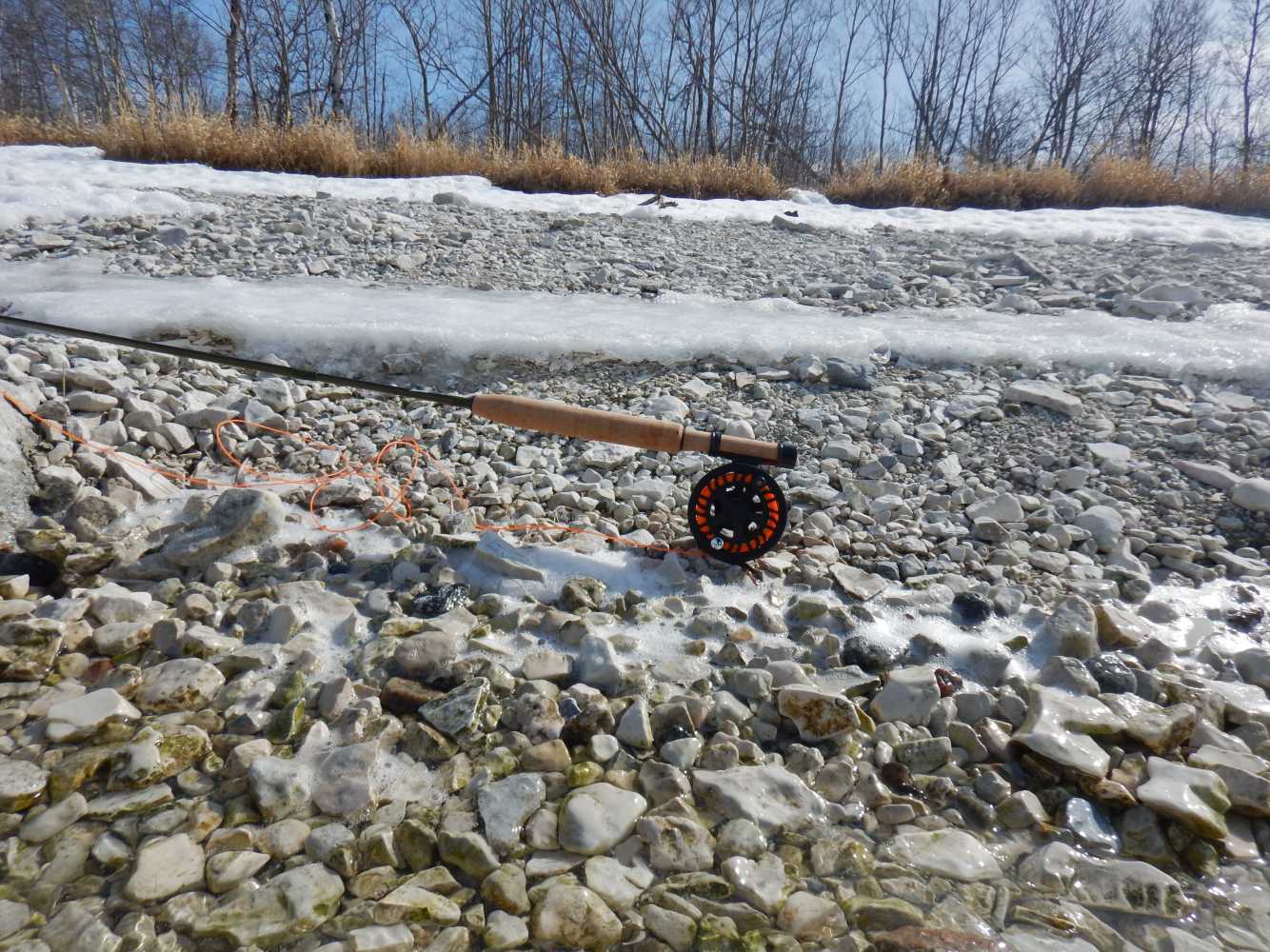 Every year for the past decade and a half, we have ventured up to the Fairford River. For the first long bit of it we went up the last Sunday of March. March 31st is the last day of Manitoba’s ‘general season’. Which is code for walleye season. So this event could be on any day of the month in that last week.

The last couple of years the season end has been amended to go to the last day of the public school systems ‘Spring Break’. As an example last year we went on April 1st. That can kinda be appropriate given the variances in weather and the wild swing in fishing.

The reason for going to this particular water is that it is the only open water (most of the time) in the province. While the water gets as cold as the rest of the water ways, it has a steep enough drop to keep from freezing.

The species available in the river are as wide as is available in the province at large (minus the stocked trout). The river is a connection between Lake Manitoba and Lake St. Martin and, ultimately, Lake Winnipeg.

It was typical temperature wise with it being -2 and not getting much warmer and coupled with a steady north wind but either way, we got right at it.

Truth be told this can be an under attended event. On good years it has just been me and a die hard or two. With fishing there are no guarantees. Some years we go and freeze are butts off catch nothing and some years we are shirt sleeves and catching everything.

In this light, I decided to pre fish it on a nice day prior to the event. Partly to show fence sitters that the fishing is good, partly to guarantee I got out there (just in case there was a snafu).

The Fish are Biting My Flies

Once it was established that Ciscos (locally known as Tulabi) and a whitefish were taking flies, then more people confirmed. So 5 people carpooled to got up to the Fairford River in Central Manitoba.

One problem that came to light was the, now tired, “Facebook ruining fishing” effect. I create an event every year and you know how Facebook will let you know about events in your area? Well I posted the pictures from my Thursday on the event to encourage fly fishers to take a chance. And some of the pictures made it very clear where on the river we were.

Clearly the the North side.

Come Sunday those 4 guys I pointed out earlier were there when we got there and held that spot till dinner time.

Now when I got close to them they yelled “ANOTHER WHITEFISH!” every time they landed a cisco I knew they didn’t know squat. Since I added a whitefish picture to the event, I made the leap in logic that these dudes may have known to come to this river, on this day and stand in this spot…or it may have been a wild assed coincidence.
I have no problem sharing water with other fishers even if they snoop our event, hog a spot and keep every fish landed (that’s what the yellow milk crate is for). Nonetheless it still makes me want to keep it secret. The yellow vests makes it seem like they were working in the area and not locals. The locals are easy to spot as they could not give a crap about tulabi or whitefish. They want walleye! So the locals stay away from the dam.

Of course whether they are local or not, whether they snooped the event and hogged the spot, it is still their right to fish. Heck there isn’t a limit on tulabi so all’s fair. Don’t want to come across as one of ‘those’ intolerant fly fishermen. But no sense doing all those other questionable things if you can’t live down to the bait fisher stereo type and leave your garbage.

Anyways I ‘Lockported’ them, moved into their area and then took over the spot when they had enough. That allowed me to finally catch a fish or 2 and eventually my first whitefish ever.

It also allowed anyone else who wanted, to catch some fish. We also had some pretty clean bite offs from what are obviously pike. I guess we could have switched to a bite tippet and got those too.

Anyways, it was a good day over all the guys that came were all troopers and I would fish with any of the again but, next year, I am keeping the invites to our forum, where I can control the privacy. Maybe a “whatsapp” group from the forum.