On May 26th I took a Father Son duo fishing. They were both from Brasil. The elder was  very experienced with the fly rod but spoke little English and the son spoke excellent English but knew little about fly fishing.

Worked out fine. Dad needed no monitoring, could cast and fish. Could read water and choose flies. This allowed me to help the son.

Over all they were looking to catch some fish and take in some wilderness scenery. The weather and the scenery cooperated, the fish, not so much.

First stop was a hydro dam along the Winnipeg river. Except for the dam, the scenery is great. This place is usually good for a few fish, but on this day, after a couple of hours, we got none. 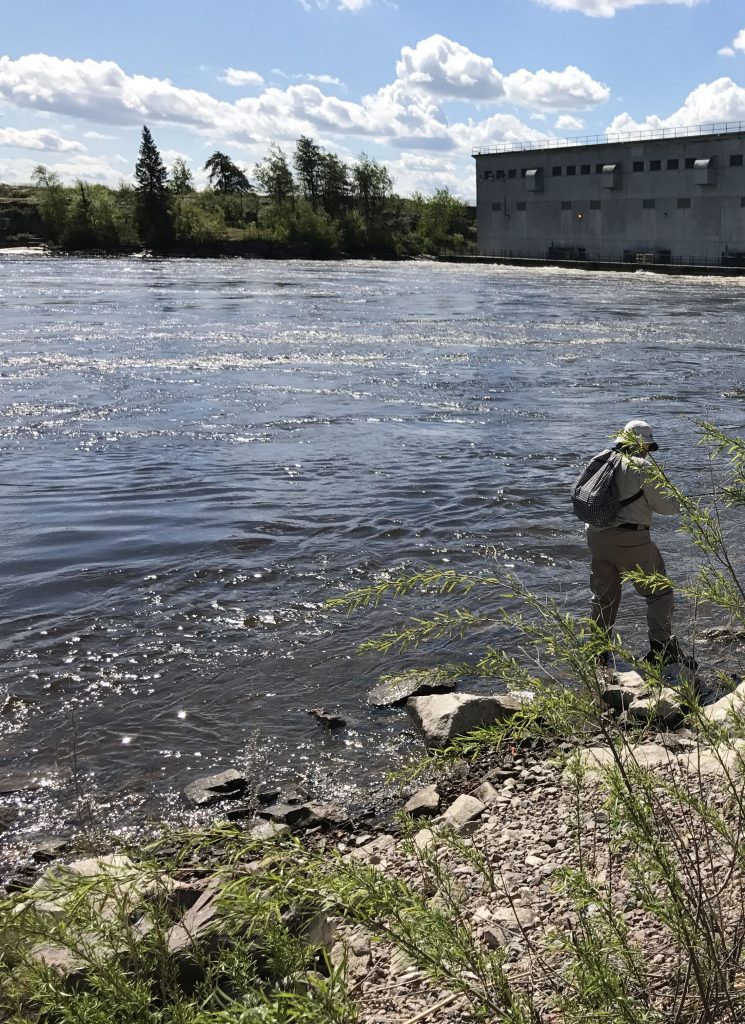 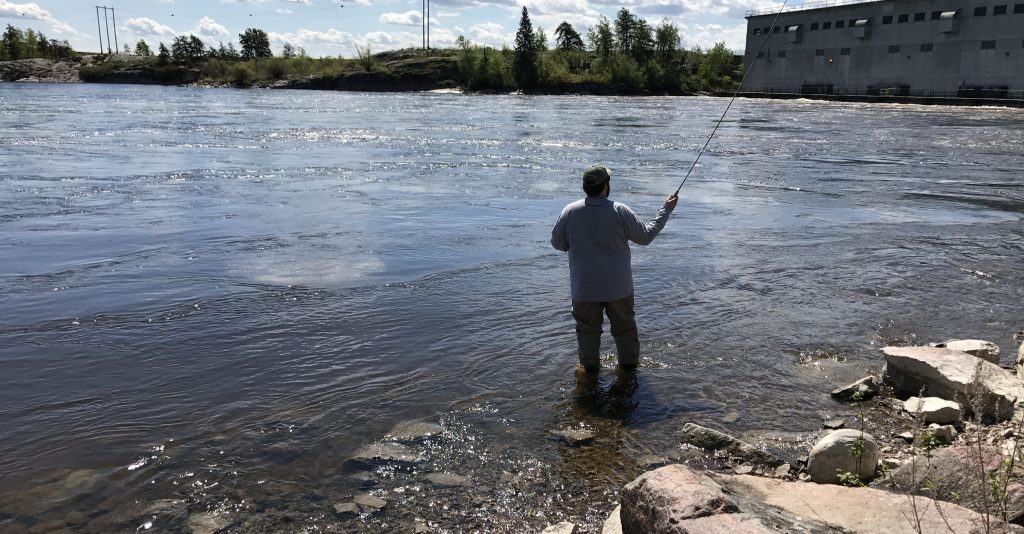 Down the road to the next stop. Where we did get some action in the form of hits and a couple of fish.

One small rainbow trout and one medium tiger trout. 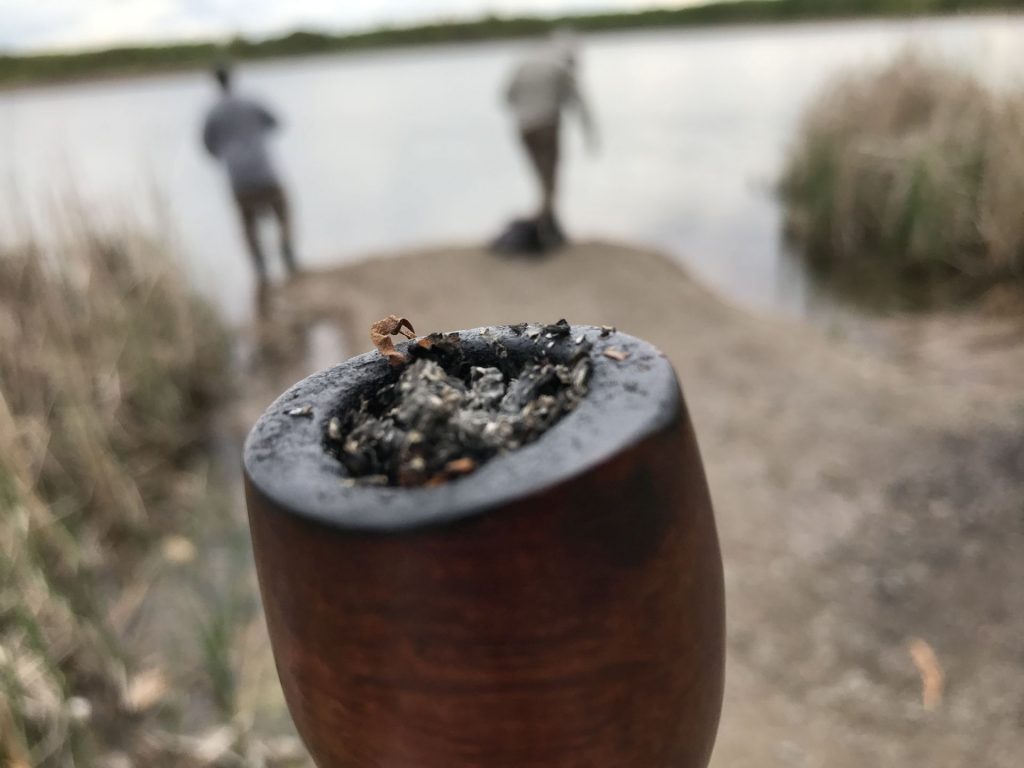 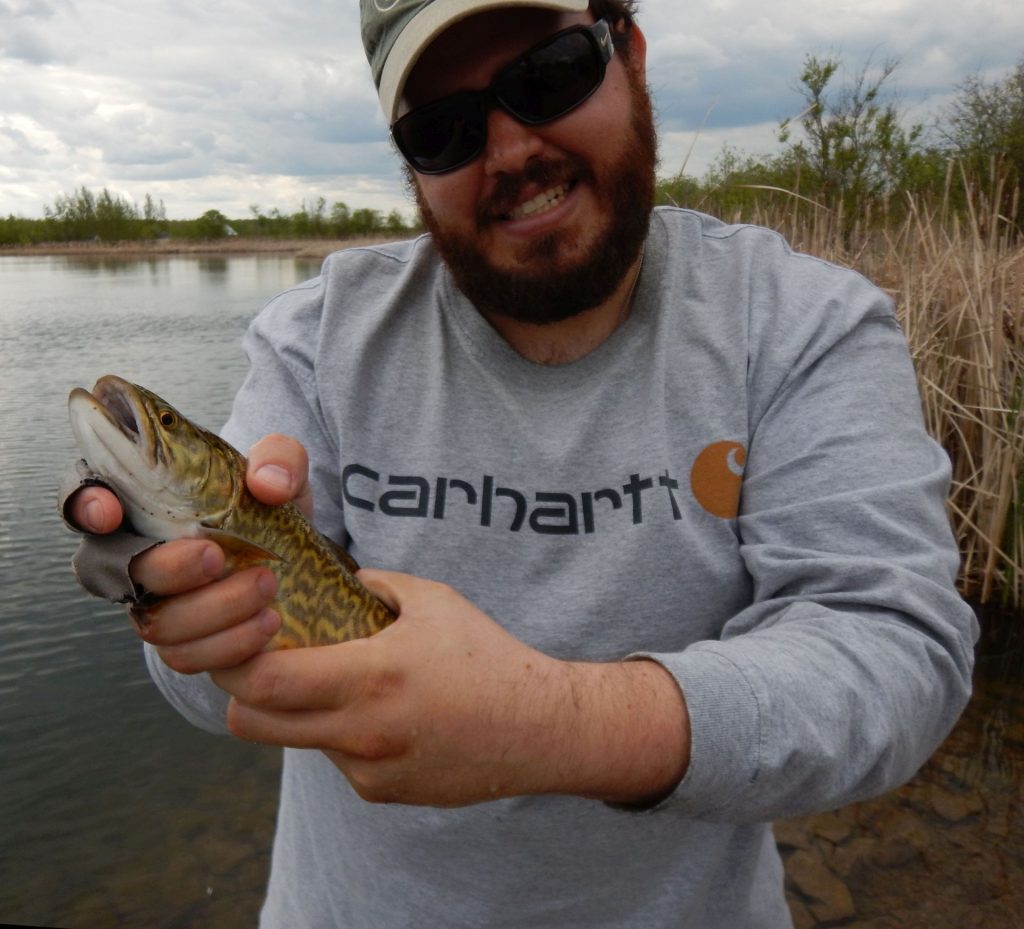 Off again to get some pike and maybe a walleye or bass.

First stop was a launching area where we got some hits and landed on small pike.

Next (and last) was a favorite area of mine. Rare for Manitoba, in that that is more than a few feet of wade-able river.

The elder got 6-7 pike. I even took off my guiding hat and caught a couple as well.

As we had been at it for 10 hours we headed home. On the way we saw a bear in the ditch.

Here is the (short ) film of our day.

So I took a Friday (May 19th) and hit a couple of lakes in the Whiteshell Provincial Park. originally I was only going to go to Barren Lake.

But the fishing was real slow. Got an 18″ pike off the top and then nothing for hours. 3 fish in 3 hours is slow for me. 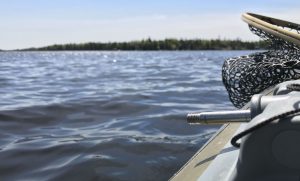 I did manage a couple of nice loon shots on my Nikon D70. 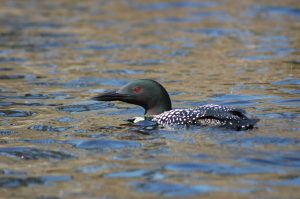 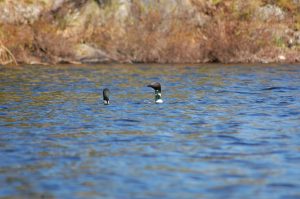 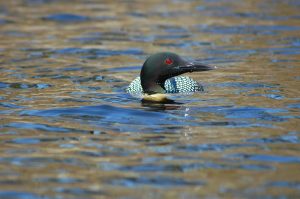 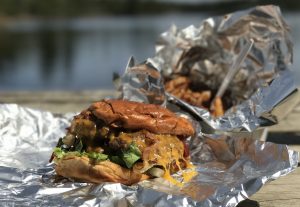 While I got few fish at Barren, I got many at Lyon’s. Those fish were all recent stockings and I couldn’t keep them or the perch off my hook. Between me and the Gulls, Terns, Loons, Osprey and Mergansers, we had a field day!

Here is the video of some of the fun.

And of course another loon shot. 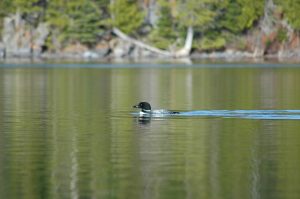 After my final perch I went back to the launch and headed home. But one final goodbye!

Anton’s Lake is another pothole type prairie lake and considered the closest of the so called “Parkland” lakes. It is located 202 kilometers from the western edge of Winnipeg. Located at the junction of highways 10 and 16, this lake had an aerator install and has been stocked with rainbow trout and brown trout for a number of years. This week marked the beginning of the Manitoba general fishing season. I’ll never know why but the opener is always on the same weekend as Mother’s Day. As I teach all day Saturdays I have a hard time getting out on this particular Sunday. So I went trout fishing (trout lakes are legal all year round) on the Friday before. The wind was a steady ‘ill wind’. That is to say an easterly wind. When this happens fishing the shores and points the wind has been hammering doesn’t always produce fish they way an predominant NW wind does. What actually happened was the fish were feeding in their normal spots but that driving wind made positioning, casting and stealth, a real challenge!

My opening fly was a weighted muddler. On the bench a brown tailed orange winged muddler with a burnished brown diamond dub body seemed the perfect fit. 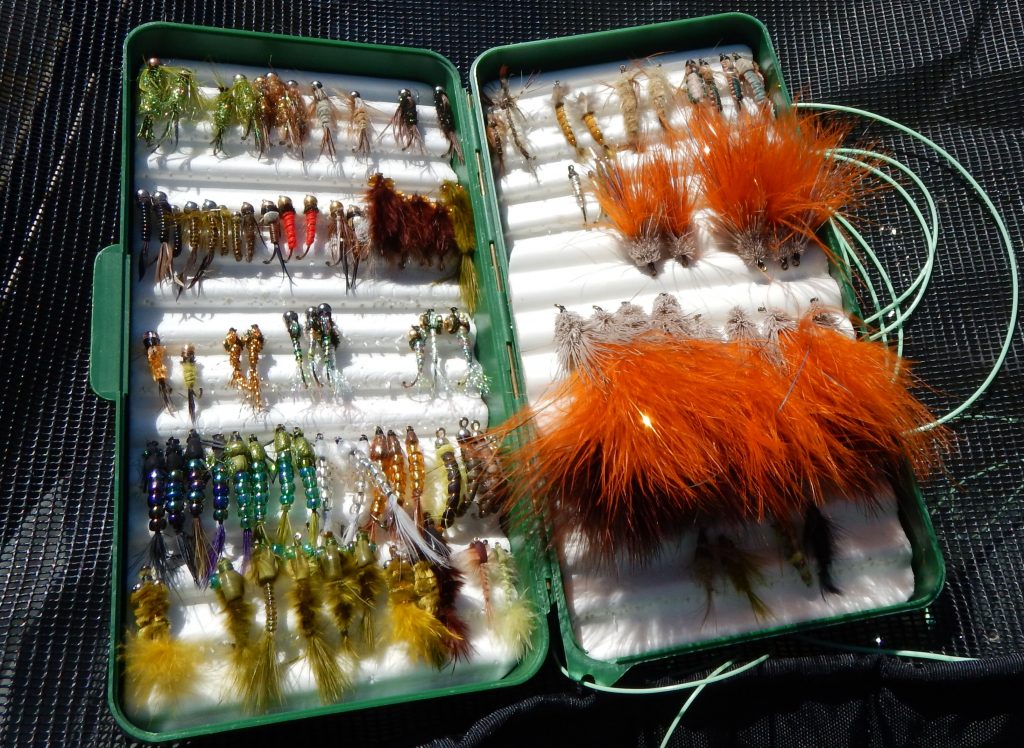 Fished the whole lake with that thing trying to beat its weight AND that wind. My shoulder was a aching.

Now I did see some active fish slashing minnows in the weeds but they did not seem to find this muddler enticing.

What did end up working was a golden flash-a-bou nymph pattern. 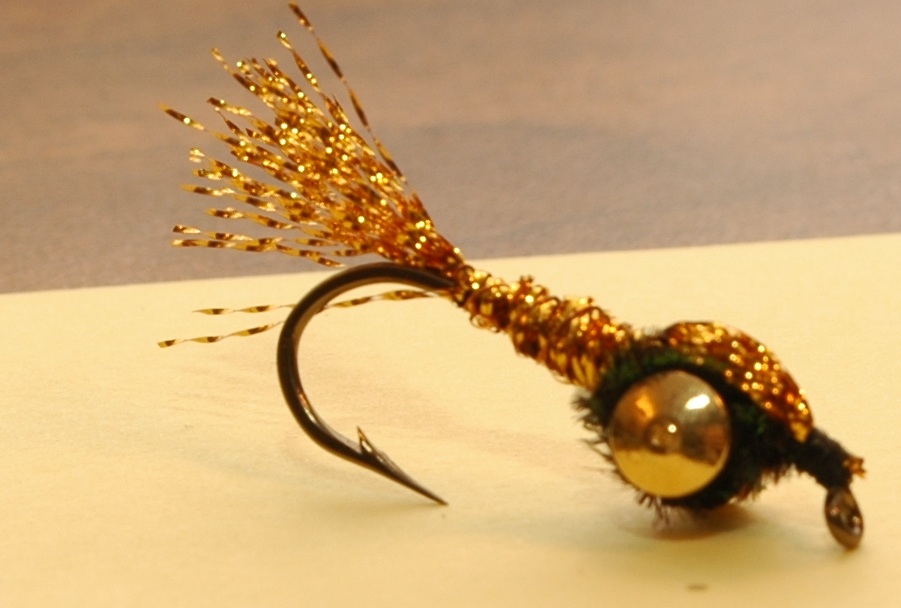 Here are the 2 fish I got on that fly. 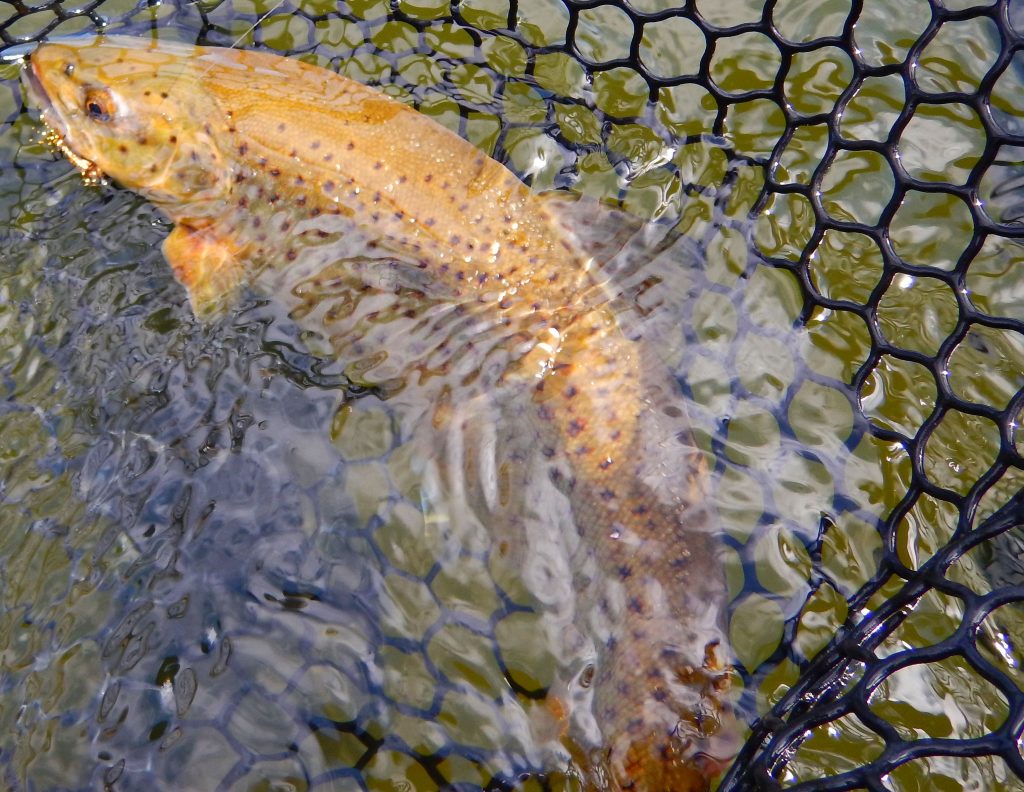 Afterwards, the the wind died and the BP changed. The active fish stopped showing and nary a hook up to finish my time.

I did risk taking my Nikon D70 and got good bird captures from the boat. 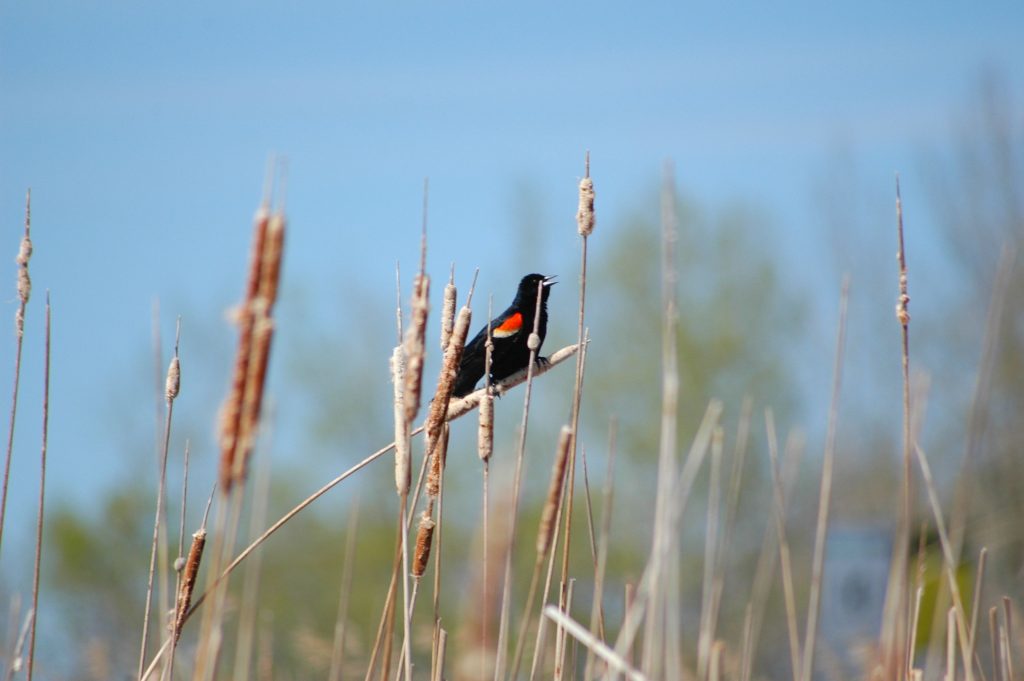