Back From New Brunswick, Part 1 The Miramichi!

Although this is a site dedicated to Fly Fishing I Manitoba, I do travel and fish elsewhere.

If you are at all like me, you have read a boat load of outdoor, general fishing and fly fishing magazines. Pretty well guaranteed you will have come across an article on Atlantic salmon fishing and probably one, two or a few about the Miramichi River in New Brunswick. 250 kilometers of river with the best salmon numbers of any river in North American !

A few years back I went to Newfoundland. I was psyched and geared up to fish for the ‘King of Game Fish’!!  When I got there the weather was hot, the streams low and most closed to fishing.

I did manage to raise a few in Grosse Morne (in national parks you can fish w/o a guide) but not a hit sniff or bother.

This year I figured against salmon fishing (though I did bring appropriate gear in my 8 and 10 wts). I checked out the local Fredericton fly shop, Fredericton Outfitters, where I found very friendly helpful owners and staff. They proceeded to tell me that we were in the area at one of the best times, that the river had fish, the levels were dropping and that people were getting salmon.

So we asked about guides and such, when they mentioned Wilson’s Sporting Camps who had access to the best pools on the river.

Turns out they had an opening and we could come up and fish  the afternoon and evening for a discount rate.

It wasn’t a long drive, 1½ hours,by fly fishing in Manitoba’s standards, but by the time we got there we considered staying the night.

They offered us ½ of a duplex and almost apologized about it, but the rooms where awe some, clean and classic in design. Came with everything you needed to make food etc.

And our cabin looked out onto the Miramichi. 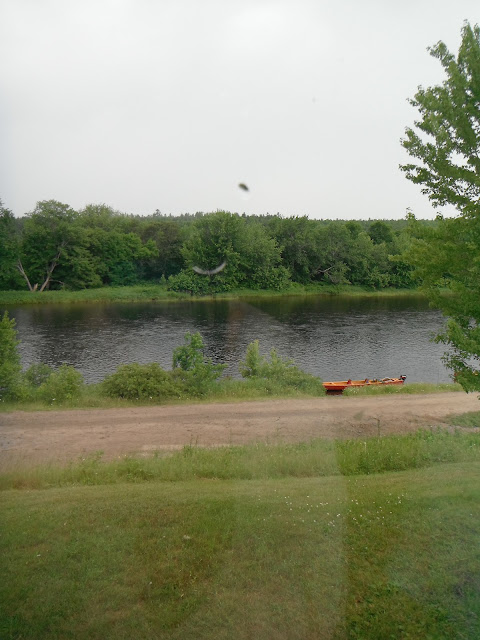 Now the term ‘world class’ is bandied around a lot. Anyone who knows me, knows I hate the term in most of its uses. Particularly when used to describe something similar you can get elsewhere in the world and is therefore considered ‘world class’. By those standards I am typing on a world class laptop….

But despite the very unassuming nature of Keith Wilson (to whom the camp has been in his family for 150 years) Wilson’s is considered world class. If I was in doubt; I found a European salmon fishing magazine in our cabin that wrote about fishing in Russia, Norway and yes Wilson’s.
So 1½ hours from an international airport and you are on a legendary river, fishing for a reasonably unique and potentially large fish in a pristine environment…ya that pretty well sums up world class fishing.

So here I am with my wife at a  world class lodge (normally $700 per person, per day and not including tip or licenses) getting ready to fish a river that is on most fly rodders life list.

So into one to the jet outboard powered 26′ canoes for one of the smoothest and scenic boat rides you’ll ever have.

My wife, Adelle, Henry our Guide and yours truly.

Our guide, Henry has been fishing/guiding the Miramichi for 57 years.

The method for hooking salmon is quite simple and either works or doesn’t or in the words of our guide, “if they’re there they’ll bite if they’re not they won’t”.

So you tie on w/e fly you heard works, the afternoon it was the Undertaker, then ¼ cast and drift through the run till the line straightens. Then step up or down the run, strip, t-snap or snake roll your cast and repeat. It was nice and overcast, raining off and on and a bit cool so perfect for fishing. We didn’t feel a single bump but some fish did pop up. One made a big splash upstream and Henry said ‘that one got past you’.

We went in for dinner and back out at 6. This time we fish a run/pool just in front of the lodge.

We changed our flies to Green Machines and finally started getting some hits. My wife was killing it with salmon parr and 1 nice brookie. I was getting hits but no hook ups. The light was fading, it was 8:30 and we are supposed to be off the water at 9, I had made 1,000’s of casts.

At 8:45 I could finally yell ‘fish on’. Put a good bend in the rod, got a coupla jumps and, just before the net and the perfunctory ‘grip and grin’, the hook popped! Now It didn’t matter because my wife was taking lots of video. We have video of the trip up river, down river, our room, me casting, etc. But in the excitement of someone actually hooking a salmon she forgot to hit record.

So a few more casts in the fading light, then the trip back to our cabin, where we had a cup of tea and watched the sun set on the river and then the bats and fire flies come out.